Thank you for your purchase!

If you have any questions please drop us a line on:

A WordPress learning management system which turns your WordPress site into an online academy.

Instructors can create and sell online courses easily via a market place. Track course enrolment, completion and sales via a single dashboard. Message the whole class or individual students separately.

Students can take and manage courses, and also track course progress via their personal accounts.

This is the main course page which allows admin to see all existing courses and also able to manage each lesson by clicking on “Manage Lesson” button. 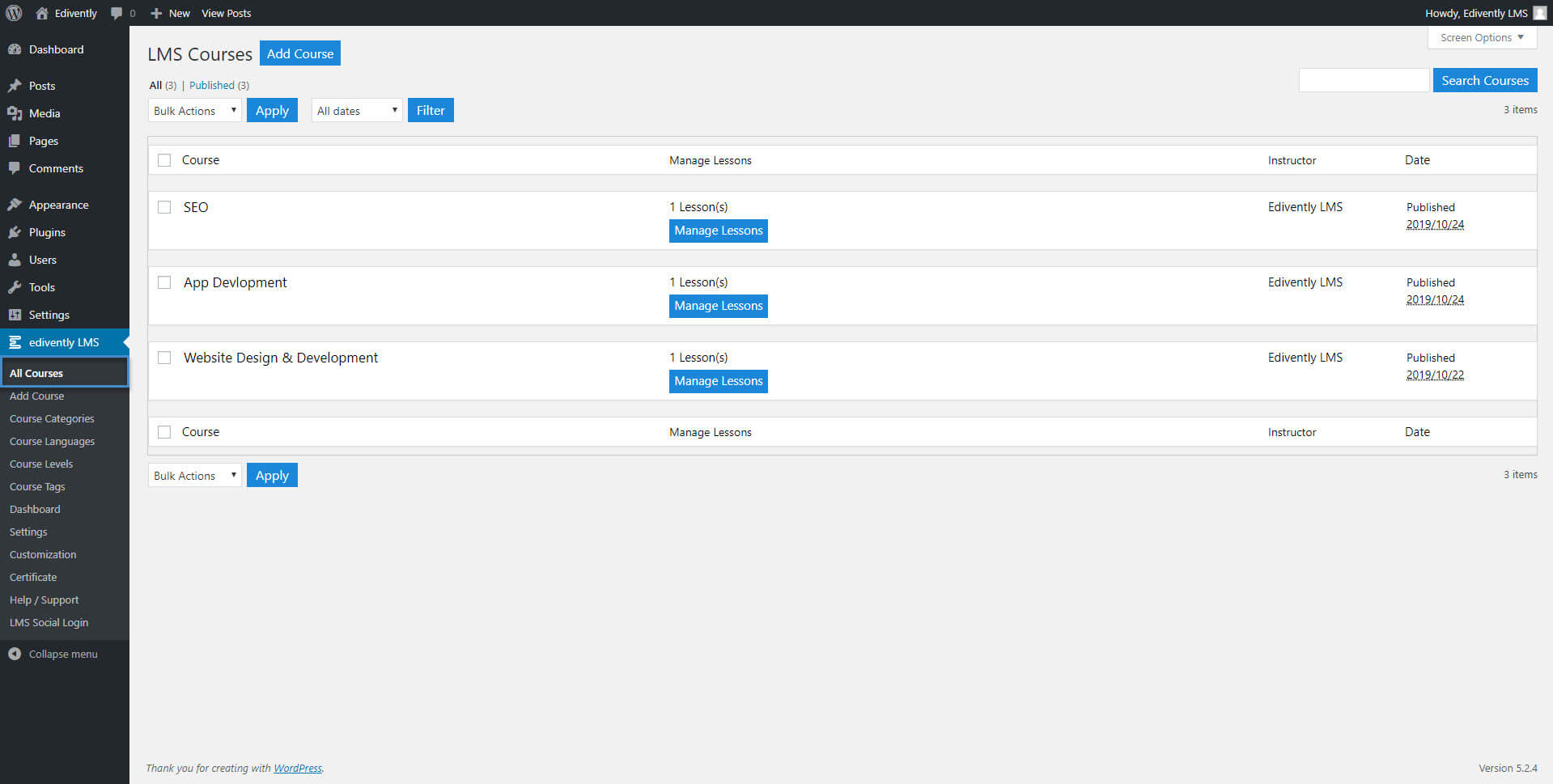 In the “Manage Lessons” area you can create Lessons and Topics. Each lesson and topic can be rearranged by dragging and dropping in the curriculum. All lessons can be made sample. This means that Student can preview sample lessons free of charge to get a better understanding of the course content before purchasing. Each lesson with its respective topics can be also delivered in a drip-feed format by using the “Visible After X Day(s)” function available.

Each lesson and topic can be accessed via  “+” button which expands the panel and allows you to add new topics, content, learning resources and downloadable materials.

The quiz feature gives you the option to create Multiple Choice Quizzes to test your Students.

3. Click on Add ( + ) icon to expand quiz panel and insert details as per your requirement.

Admin can click assignment section in their curriculum to test your student’s knowledge. Here are some steps which help you to create an assignment.

1. Create a new assignment by clicking on “+ Assignment” button.

3. Click on Add (+) icon to expand the assignment panel area.

4. You can create a detailed explanation to your assignment by clicking on “+ Content” button and

5. Also, you can add learning materials and resources by clicking on “+ Material” button.

We have Four type of Categories. 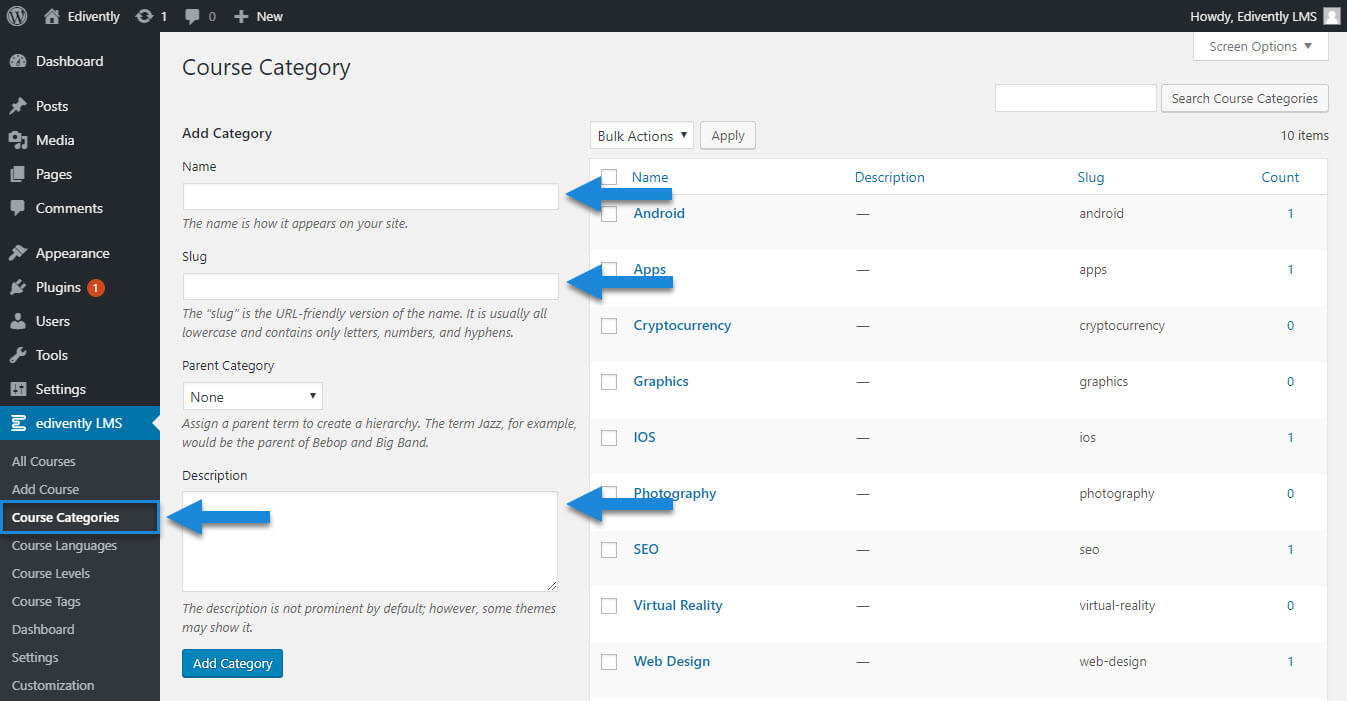 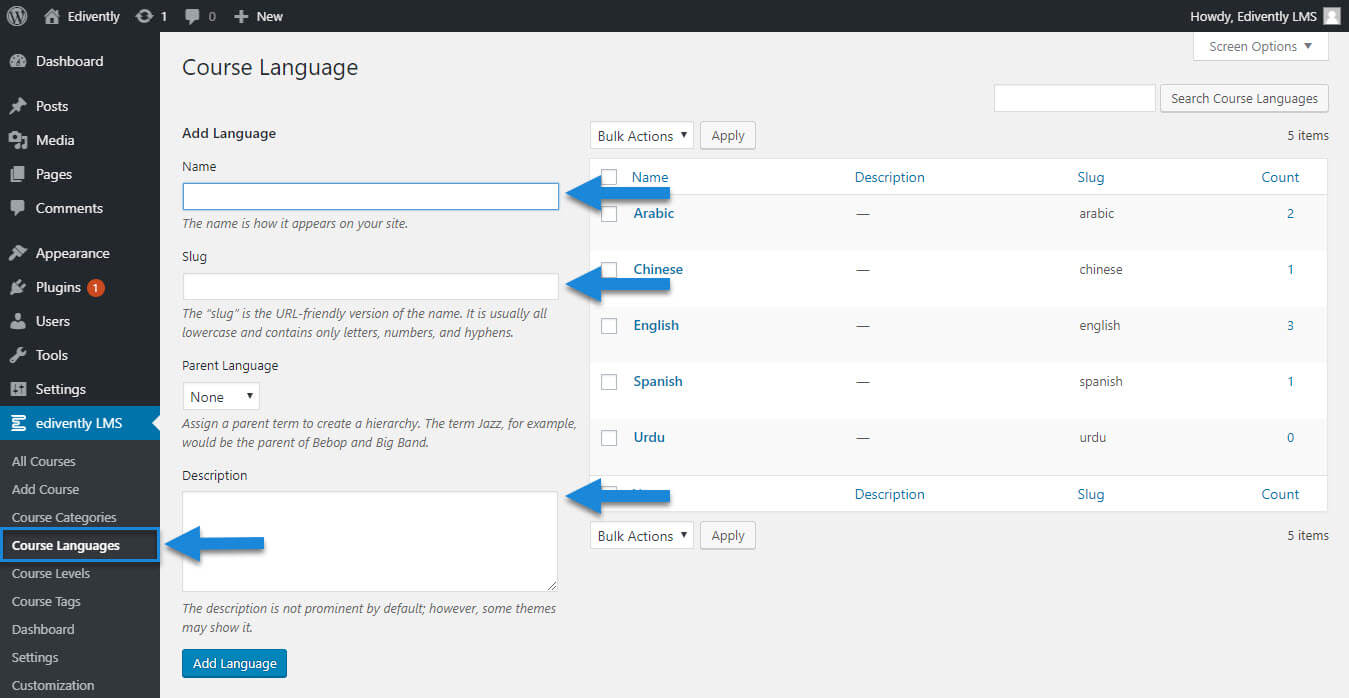 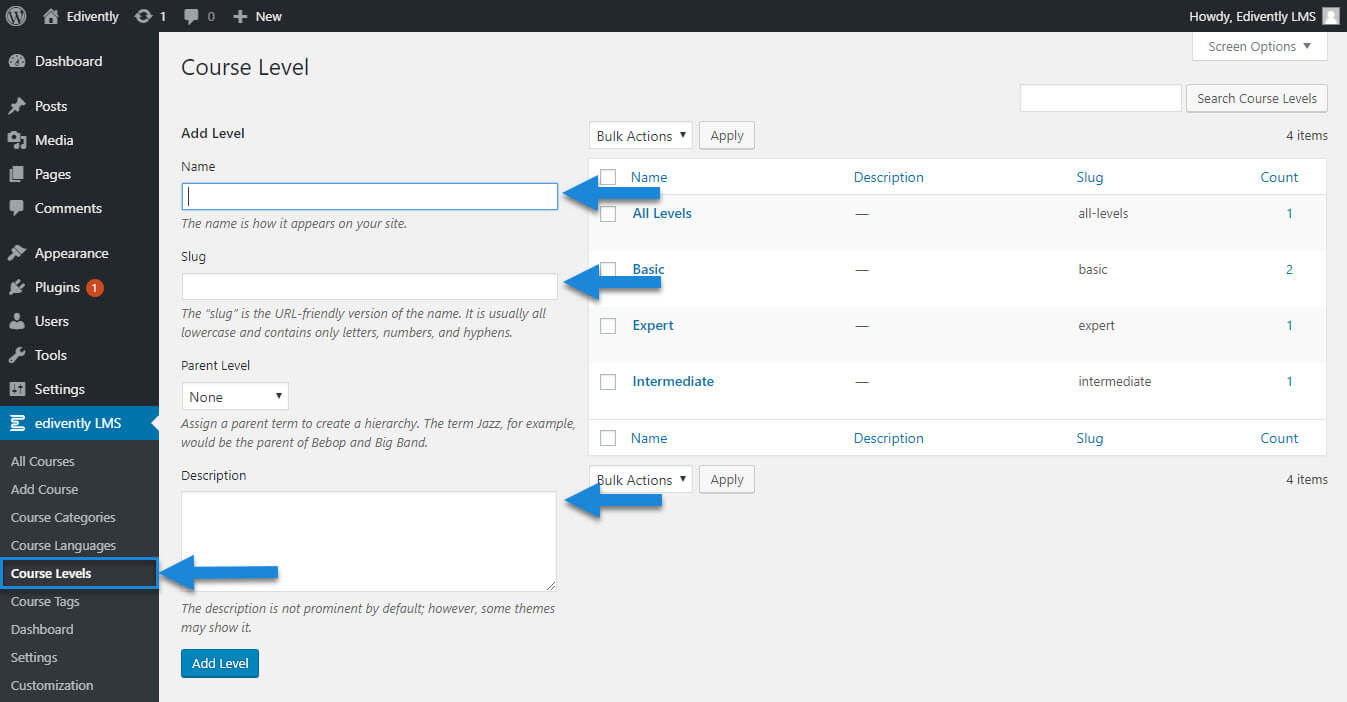 Overview of Courses, Students and Sales Options how it Works.

When you click on the course icon it will fetch the details of courses which you can view in two modes. (Expand Rows & Collapse Rows)

When you click on student icon it will show you the email of a student, no.of Courses, Sales, and Date

You can see the sales of each course

This feature will let you export the data. 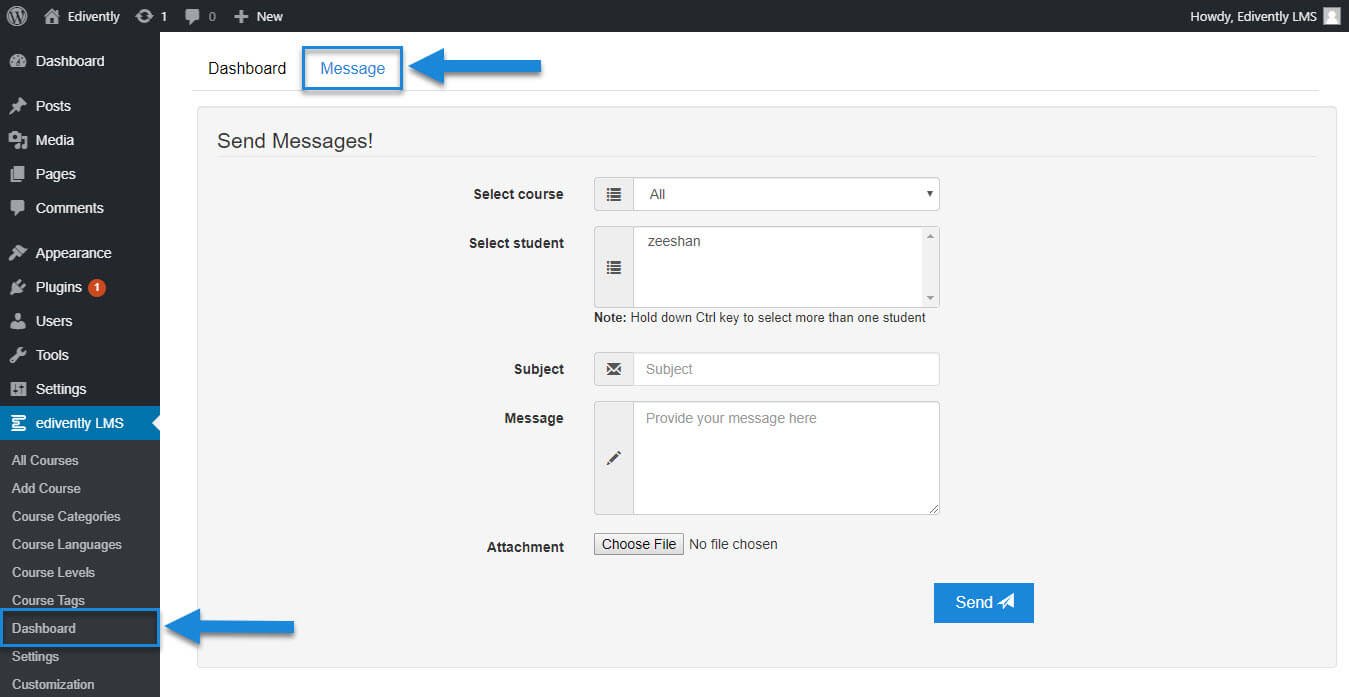 In the settings page, you can manage course sharing functionality, course template options, shortcode pages link, automatic notifications, and payment integration via PayPal. Here’s the detail of the following options.

Log in by using the ‘Login’ link in the menu. To access a course on the marketplace as a student or teacher you need to be logged in.

You can offer your courses via your own market place. Users can search or filter for courses. Courses can be also sorted by price and how recent they were uploaded on the system. Courses can be presented in a grid or list view. Each course has an Image, Title, Subtitle, and Price. 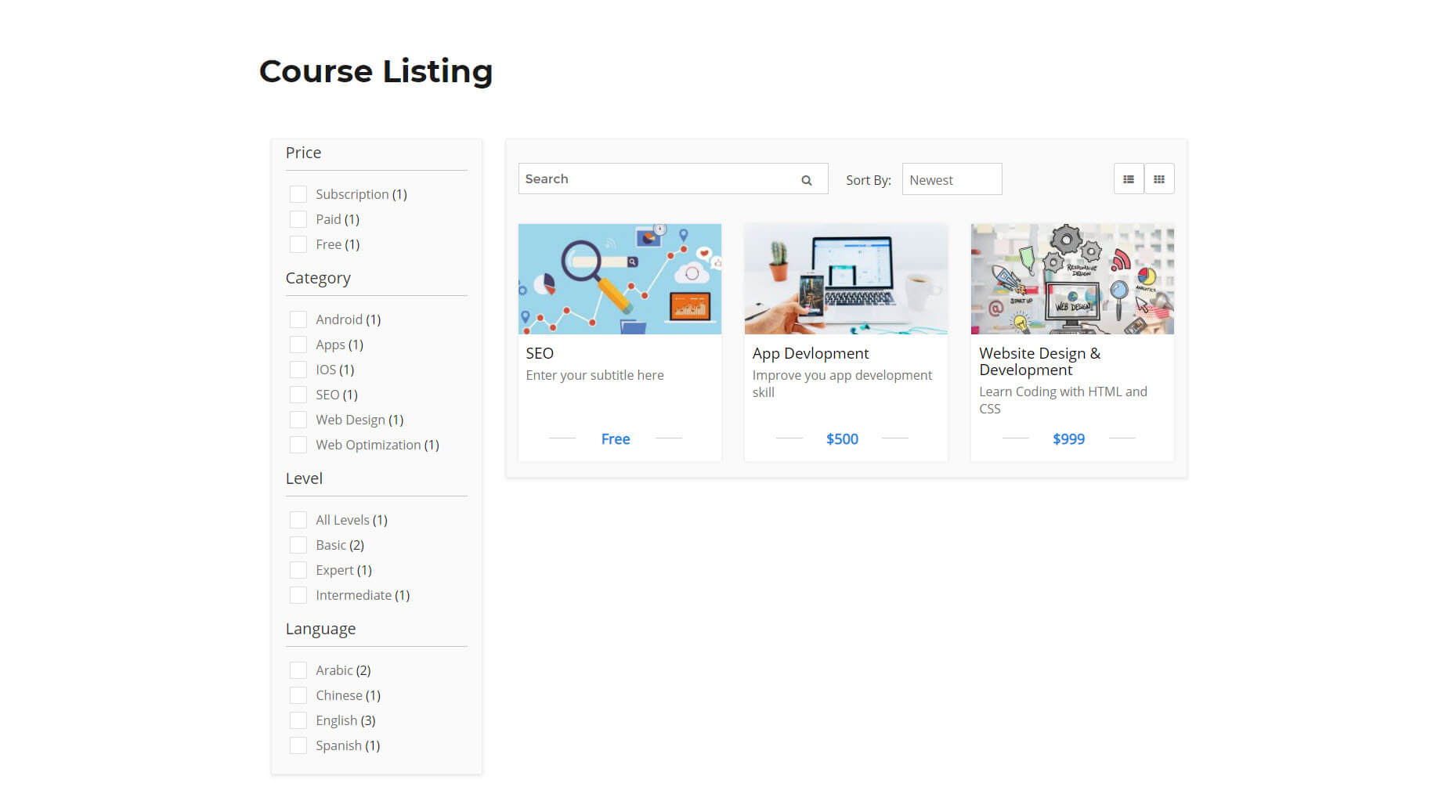 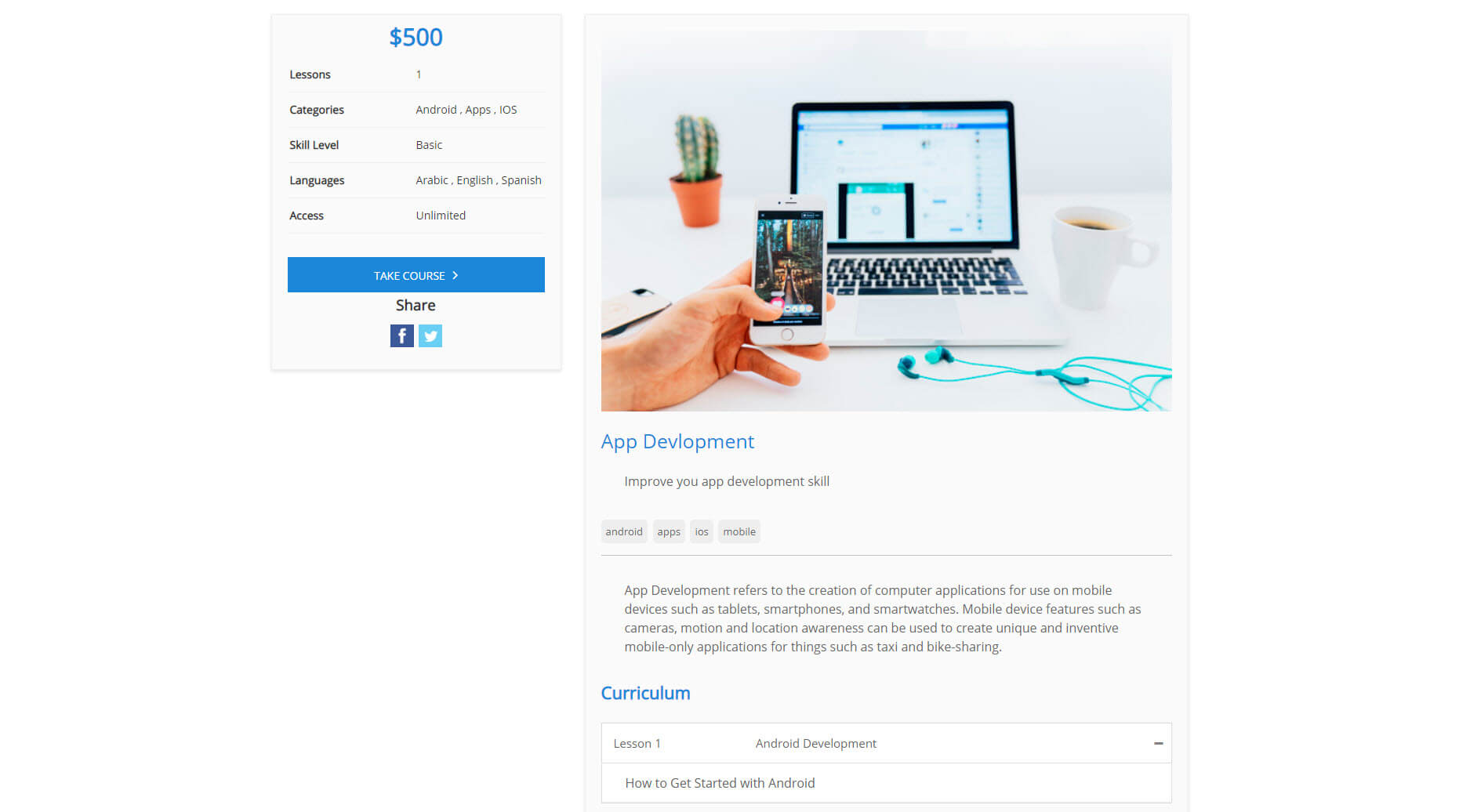 Each course can be navigated via a navigation panel on the right-hand side. It includes course progress, a list of lessons and topics. Users can access their dashboard (all courses they are signed up for) via the ‘My Courses’ button at the bottom.

The student dashboard provides users with quick and easy access to all courses which the users are signed up for. It also provides information on course progress.

This website uses cookies so that we can provide you with the best user experience possible. Cookie information is stored in your browser and performs functions such as recognising you when you return to our website and helping our team to understand which sections of the website you find most interesting and useful.

Strictly Necessary Cookie should be enabled at all times so that we can save your preferences for cookie settings.

If you disable this cookie, we will not be able to save your preferences. This means that every time you visit this website you will need to enable or disable cookies again.